OK how is it March already?

Sorry for keeping you all waiting to hear what happened on the Blues Cruise, but to be honest i needed some rest and time to process everything that happened, and what is about to happen in CHAPTER 2 !!!

So first off here's a little look inside my Blues Cruise experience.

Every day and night was packed full, so there was little time for sleep. I spent my time helping out behind the scenes, meeting & hanging out with the other artists, checking out the bands, playing with some incredible blues artists and much more!

So there i was, on a cruise ship with some of the best American blues players on the planet, the unknown new boy British harp player, supported and funded by friends and fans, ready to jump in and do my thing. As you can imagine, i was a bit nervous and the whole experience seemed very surreal, but incredible!

Here's just a few things i found myself doing ...

Being introduced to the cruise organisers early on day 1 and helping out, sitting down with Bobby Rush listening to stories about his days with Chess Records, being backstage with Taj Mahal, becoming friends with Madeleine Peyroux, going to a Mexican beach with some super cool ladies including Janiva Magness and Henri Musselwhite, chatting to Keb Mo on the dock, being a guest at an artists birthday dinner which included Art Tipaldi Bob Porter Charlie Musselwhite Henri Musselwhite and others, being invited to dinner at the captains table, playing on the Pool Deck Stage on the first night with Tommy Castro, being on stage playing with Coco Montoya and his band, being invited to play on the Victor Wainwright Pro Jam and ending up blasting a harp solo down on my knee's in front of Janiva Magness, having a quiet dinner with Charlie and Henri Musselwhite, chatting about harp stuff backstage with Johnny Sansone, watching Bobby Rush own a stage, walking around the ship helping Madeleine Peyroux give away signed cd's, hanging out in the corridor with James Harman and Billy Branch, helping out Lee Oskar's wife Sri Rome at the Billy Branch Harmonica Class, being asked to sign merch at the artist signing despite not being an official artist, being totally blown away by Laura Rain and George Friend's music, getting stopped by cruisers at breakfast and asked if i had a band of my own playing on the cruise ... Phew!

As you can see it was an amazing time, and that is just some of the things i did.

It was like a year packed into a week.

Everyone was very nice to me, i was treated like on of the gang, i had loads of fun, made some great new friends and i've been told i made a great impression in general.

Off the back of this some notable people in the blues world have shown an interest in me and my music career ... WOW!

There are so many people i want to say THANK YOU too for helping me have this incredible experience, so i've sent a special email to everyone who made donations to my Blues Cruise fund.

I must say a big THANK

YOU to the fantastic American blues singer JANIVA MAGNESS for taking an interest in my music last year, for mentoring me, and for making it possible for me to be on the blues cruise.

My next piece of news will be about what is about to happen next, and its pretty exciting! 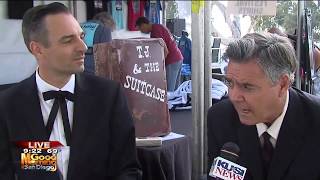